The Music Box Project and Other Such Art Candy 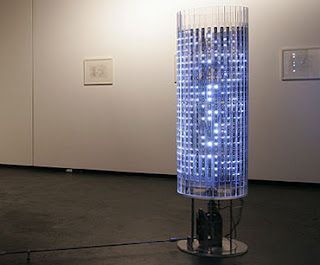 "Pleasant-sounding as music boxes can be, you have to admit they sure are repetitive." says SciFi.com's Peter Pachal in a report on the SoniColumn, a giant programmable music box.

Jin-Yo Mok is a Korean artist who plans to take over the world with his Music Box Project, a line of imaginative gadgets inspired by a conventional concept. Sculptural in appearance, the SoniColumn is consumed in colorful LED lights that program various notes of the viewer's choosing into the music box. A turn of the crank plays your custom-made music, and the column spins lazily while your illuminated notes rotate like a private galaxy.

Other notable pieces that Jin-Yo Mok has worked on include "Imaginary Korean", which is a set of typography that allow Koreans to add F, V, R and Z sounds to their language, which they do not usually have. More widely known is EMAN, a being straight from Mok's imagination with a beautifully compelling and inspiring story of Creation.

Those, among many other projects which are documented on Mok's website, show that he has a wonderfully simple-but-effective method of creating art. His drawings are not masterpieces, but they are thrust forward for public viewing because he understands that process is part of the creation of art, just as the finished product is.

As a whole, Mok's body of work should serve as a great source of inspiration for any working or aspiring artist, or just the average passer-by looking for some unique and original eye-candy :] 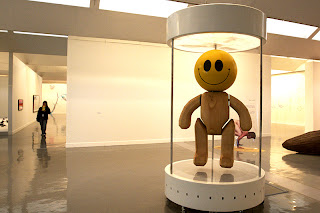