Vancouver's always been ahead of the rest of the world...,

said Alan Dojoji at the first dorkbot meeting in Second Life which took place yesterday, 18th of february, in Odyssey.
Minutes after the meeting was over a short review of the event showed up at we-make-money-not-art HERE.
Here comes mine: Well, first Maximillian Nakamura, who had invited us to this meeting, held a short introduction to the dorkbot meetings idea: "a nerdy gathering of people doing strange things with electricity, which means also with digital technology, which would not exist without electricity." His blog: http://rhizomatic.wordpress.com/. His SL group: dorkbot SL electronic art meetings. Oh, his review of the meeting HERE.
Then we went to (Landmark:) Ah Sky Lounge, Odyssey (53, 192, 297) where the rest of the meeting took place.

Basically what happened during the meeting was that Wirxli Flimflam and then ian Ah talked about their works and ideas. We got loads of information which I will try to share with you here.
First Wirxli Flimflam:
Wirxli presented himself as Wirxli Flimflam from Second Front. Blogs: www.wirxliflimflam.blogspot.com, www.slfront.blogspot.com. The flesh&blood person behind Wirxli told us he "have been an avatar performance artist since 2001 and a net performance artist since 1996", so we're not talking newbie here. He has used Traveler (www.digitalspace.com/traveler) for a number of collaborations and performances, like the Gates (after Bill Gates). He co-created the very first in-world avatar documentary AVATARA. Then he "experimented in the Moove/Roomancer community as a performance artist". (I copied the chat history during the meeting...) And then he came to Second Life. Well, if you look up his blogprofile you will find a huge list of his other blogs and a summary of his life... Here is Wirxli: 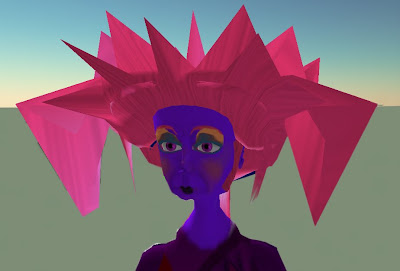 In Second Life he formed the performance group Second Front in november 2006. Directly related to Western Front (http://www.front.bc.ca/), Vancouvers main New Media center, since 1973. Some NE Thing CO was also mentioned as a forerunner to Western Front. That's when Alan Dojoji uttered "Vancouver's always been ahead of the rest of the world"! And we got some links to feed our intermedia-history-knowlegde with: http://www.michaeldecourcy.com/intermedia/, www.greggsimpson.com. Some videos were streamed during his talk, the Gates and some of the Second Front performances, which he also told a litle about. And before he left the stage for ian Ah, he let us know that he is "also in a voIPunk band called The Hotmails that uses Skype and other messenger programs for performance". Review of the dorkbot meeting on Wirxlis blog HERE. 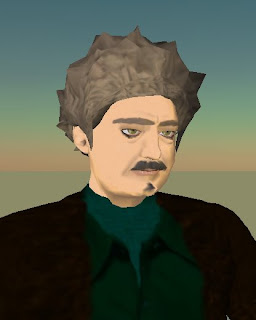 Second ian Ah:
ian Ah, or his flesh&blood, is an artist, not a special kind of artist, but simply artist. Been in the game since 1968 using many media. "I come from a tradition of visual artists who eschew the medium as a defination of our work. I would normally take this opportunity to make a work as "meeting". I have made works as "lecture" , "classroom" etc", said ian Ah, and continued:"The nature of my work is very context driven so when he [Maximillian] suggested it [the talk] be "educational",
my first response was to suggest I give an exam,...." "...In any case I think the topic should be "How can we have a Dorkbot meeting in SL?"" Well, as the meetings in SL usually are the avatars of todays meeting chated away and parallel discussions occurred... Or the discussion split into one about the practicalities of SL meetings, particularly this one, and ian Ah trying to rise a meta discussion about (SL) meetings. "Let me say that I am a very formal artist who sees networks as objects," he said. The meeting as object, this meeting as an object or an art object, the first dorgbot meeting in SL as an art object...?

Chuck Masala had asked Wirxli earlier on: "Is it difficult to "perform" in an environment where really everyone is performing?" With the dorkbot meeting; did it become an art obejct? Are all SL meetings (art) objects?
Now Maximillian introduced one of ian Ahs works: "Keeping on Top of the Top Song" from 1970 (nr 17 HERE). Them ian mentioned things he has worked with since: broadcast weather, soap operas, computer rules, computer games, education as colonialization, remote control. What about SL? "My interest in SL is to see how it predetermines action", he said. Remindes me of the Flack attack project which (also) question the autonomy in a precoded environment (like SL)... Mr Dress up was brought into the light of the meeting..., I've never heard of him before... Then it was time for beer! ian disappeared. I hope he didn't fall asleep in his bathtub!