Krystal Epic, in conjunction with SL Reports, has teamed up to create the Best in SL Art Awards! This project is an opportunity for the patrons of the art community of Second Life to nominate who they think are the most influential avatars in our digital art world. Likewise, this is a chance for the driving forces of our community to be recognized for their astounding contributions. The award will be fame and publicity for all of the winners-- something that does not hurt when you're involved in the Second Life art community.

This is a great opportunity to get your name and/or the names of your comrades and colleagues out there! Anyone can be nominated, and you're certainly welcome to nominate yourself-- in fact, I would highly recommend you do so, since the nominations are done it blog format, and it's a great way for you to assess your role in the Second Life art community and give yourself a pat on the back for your contributions!

The Schedule for the Project is as follows:
Be sure to get your nominations in, and don't forget to vote when the time comes! This is a community project, and depends on the participation of everyone-- so get on the site and participate!
Posted by Jackie! at 8/26/2007 12:11:00 PM 2 comments: 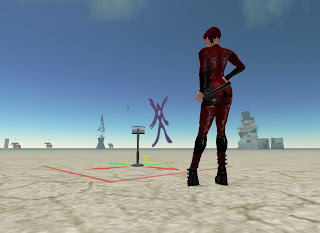 The VAA logo looms in the distance, begging to be burned alongside its Burning Man counterpart.

Ladies and Gentlemen, I am proud to announce the official registration of the Virtual Artist Alliance Theme Camp for Burning Life 2007!

We currently have 500 prims at our disposal, and I'm looking for a handful of people (three, maybe four) to help me build one large, cohesive piece on the land. We will be working together under a theme to create a space for all of the members of the VAA and any Burning Life passers-by to use and to have fun in.

"Peering outward from behind a mottled screen of vines and leaves, the Green Man does not speak or sleep; he waits. His meaning and his origins are largely lost to time — the Green Man wasn't named till 1939. We know, however, that this type of enigmatic figure was the work of artists, anonymous craftsman whose unsigned work adorns the crevices and walls of medieval cathedrals. This year we will appropriate the Green Man and the primeval spell he casts on our imaginations for a modern purpose. Our theme concerns humanity's relationship to nature. Do we, as conscious beings, exist outside of nature's sway, or does its force impel us and inform the central root of who and what we are?"

The Virtual Artist Alliance will also be utilizing this theme to the best of our abilities to make our plot of playa beautiful for all to see. To read more about this year's theme, click here.

The Burning Man Festival has brought together countless numbers of people who all get together in the name of art, humanity, and nature. As such, this community of people has put together a set ten of principles which are to be followed by all participants, and will apply to us and our endeavors as well.

Please take the time to make yourself familiar with the principles, as they will factor heavily into what we build.

Things to Keep in Mind

And finally, these are the important dates that you should know in regards to building with us- 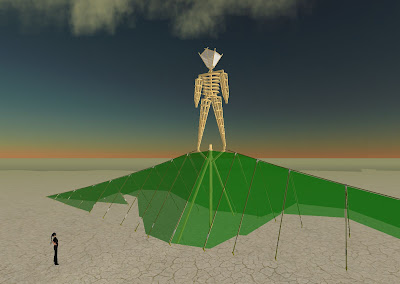 On a vast plain of white desert, the Burning Man stands alone. Soon this will change as the Burning Life grid officially opens on August 24th at 6pm SL.

I wasn't in SL for last year's event and I'm eager to see what will happen, and to dive in and participate. The VAA didn't exist this time last year and many of it's members were not yet inworld. So lets get out there and create some awesome builds! The theme for this year is "the Green Man."

News and information about the event is at the Burning Life Wiki HomePage. Below, I've copied and pasted from the Wiki but be sure to visit the site for more.

There will be three sizes of camps, the largest of which requires the submission of a proposal. The others may be had by finding an empty site and claiming it by clicking on the terminal. Art installments won't be on plots but on any of the sims with the name "playa". "Art installs will be limited to a max of 50 prims per art install with a max of 5 art pieces per account."

There Is No Registration Process For Art Installments So Go Build Something!

In addition to the camps and art installs there will be Mutant Vehicles.....
What are Mutant Vehicles?
At burning man, a collection of strange and extreme vehicles cross around the terrain. Their basic function is to serve basically as 'taxis' between the different parcels and art objects.
In burning life. The Mutant Vehicles will basically offer the same function as they do at Burning Man. Allow people to go from one spot to the other AND be a sight and experience to enjoy.

Due to a surge of First Life activity and a general urge to be lazy before my latest school semester goes underway, I've been lax in my duties for Second Life. To make up for this, allow me to introduce to you (for the first time on the VAA blog, anyway...) the Artist Self-Promotion Website.

This website was created to address the problematic issue of Second Life being recognized only for its accomplishments in business, sex, and the extermination of gambling. What non-residents don't realize (and a disturbing number of active residents, as well) is that Second Life, just as any other culture on this earth, is supported by its art community. When I expressed my interest to further the exposure of the Second Life art community to Krystal Epic CEO Enniv Zarf, he jumped immediately on board and provided a webspace through which I could launch the project.

The website is bountiful with articles and insights in regards to the Second Life Art community, as well as a number of "how-to" articles that were written to help artists and gallery owners in Second Life better promote their content and expose it to the public. It is a free service to all who would venture to use it, and is open for user commentary in order to improve its content and make it more useful for everyone. 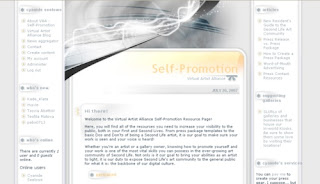