A show of hanging scrolls and new digital drawings by Alizarin Goldflake will open on Saturday, January 23, at 3 pm PST in The Art Conservatory at Sapphos Commons. 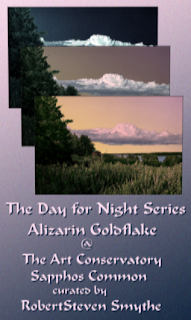 This is a show of many Firsts. It is the Grand Opening of The Art Conservatory at Sapphos Commons, featuring RobertSteven Smythe (of Artemisia fame) as the curator. All of Alizarin's digital drawings are seen in Second Life for the first time. And also for the first time, all of the work inside the Conservatory will be available in Real Life at http://www.marthavista.com/dayfornightshow.htm/.

Centerpiece of the digital drawing installation on the second floor, the "Day for Night Series" consists of scripted images that change their time of day before the viewer's eyes. These four variations on a an image are of a summer cottage overlooking a wildflower meadow, with a glimpse of the ocean in the distance. They come from a RL series of digital monoprints in which the black & white drawing is constant throughout the two dozen prints, while the color is unique to each individual print. The four scripted drawings are accompanied by a selection of four new non-scripted images.

Alizarin's hanging scrolls are on display downstairs (also outside in the park as wind-interactive banners). These scrolls represent an RL direction that is recent for the artist and uses a creative approach she discovered in Second Life. The physical presentation of the collages was inspired by Japanese art, specifically paintings which are displayed as hanging scrolls called kakejiku.

Lastly, Alizarin's popular "Metempsyche's Garden" graces a frozen pond outside where skaters can skate and mingle with the giant white particle drawings blowing in the SL wind.

I make several different kinds of art in SL. My main form is Immersive Art, so-called because the viewer is meant to enter the work either by avatar or camera. The art is made of nested prims, digital textures, and scripts. Many of the builds have poses and sounds in them. The point of the art is the kaleidoscopic interaction of the textures, as well as the different moods expressed in the pieces. Some of the sculptures emit extra-large particles, which are actually highly-detailed digital drawings.

The RL Digital Drawings are done just like traditional drawings except that I use digital tools, including a software program called Corel Painter 11 and a pressure-sensitive digitizing tablet and stylus. As I draw, the tablet and stylus electronically translate the motions of my hand into strokes that look as though they were made with the drawing tool I have selected (charcoal pencil or pastel, for example). I see these strokes occurring real-time on my monitor. Jpgs of the very large drawings are imported at 1024x1024 into SL.

2-D Digital Collages are made in RL based on a creative approach I discovered making art in SL. The approach is called process art, and the main characteristic of it is the fact that the end result is not envisioned at the beginning but arises spontaneously from the process of combining and composing visual elements.

Musical Kinetics are a collaboration between artist Alizarin Goldflake and musician Flivelwitz Alsop. The series was inspired by the art and music of five Asian countries: China, Japan, India, Tibet, and Mongolia. Amazingly, the complex compositions were all created with the little 10 second sound loops that SL allows. Walk up close to each piece to activate the music. These pieces are essentially 3-D collages using textures, scripts, and particles.

Regardless of the form. each piece of my art comes from and is intended to share an experience of visual , emotional, and spiritual intensity.

RobertSteven Smythe has been involved the Second Life art scene as a supporter of the arts and curator at Bissorte Marina and Artemisia. He has been responsible for bringing exhibitions to SL such as "The Collector," an exhibition of Sichel Seifert's Second LIfe Collection of art by SL greats elros Touminen, Glyph Graves, Starax, Lightwaves, GoldFlake, and many others. "The Entertainer," an exhibit of White Lebed's sculptures of musicians, was set to a musical animation presentation. An earlier show, "MesmerEyes: Alizarin's Visions," exhibited for the first time her spectacular sculpture "Flutter," an interpretation of the Japanese Taira Clan crest.

Robert is very proud of the Art Conservatory designed by Tasha Kosotolany. This is an intimate gallery where Art Meets the Environment. The first floor gardens surround the art to create the elegance of a gallery and the freshness of a conservatory. This gallery's expert staff handles artists and guests with a one-of-a-kind kid-glove approach. It offers all exhibiting artists a full staff ready to assist in making the exhibition an event to remember. Technical Director Meagan Thespian handles scripting and sim mainenance, as well as assisting artists with scripting simple vendors. She also checks all scripts for efficiency. Our Director of Design, Tasha Kostolany, will create special landscapes for artists' sculpture in our large open green space outside the conservatory. Her design of the Art Conservatory was the inspiration for Smythe to come out of retirement to be the art director/curator at Sapphos Commons.

Marlena Poliatevska, CEO of Sapphos Commons and owner of the Gowers Sim, has developed a beautiful residential sim fashioned after the town of Truro which is in the county of Cornwall in south-western England. She started the building of the village in 2007. It has become a coveted place for residents, who enjoy the celtic/english atmosphere of the sim.
Posted by Sunn Thunders at 1/10/2010 02:03:00 PM 117 comments:

Erato of Caerleon is having another Imagine Create Challenge. This time the challenge is to create a work of art that uses no texture.

Here are the rules:

4. Only low lag scripts may be used (as determined by our script police)

5. All work must be submitted to Sabrinaa Nightfire by midnight on Friday, February 12, 2010.

The management reserves the right to not show any piece that we determine is inappropriate for this show.

This will be a judged show with a panel of judges determining the first, second and third place entries.

The show will be located somewhere in the Erato of Caerleon sim.