Immersed in Drips and Dots

An "immersive painting like environment plus soundscape," Drips and Dots by Juria Yoshikawa is a sensory stunner. The beautiful bubbles and ribbons dance about as the soundscape, which was inspired by the cello-fiddling of Juria's nine-year-old son, envelops—your senses are treated to a satisfying experience that will make you smile. Although not yet officially open, Drips and Dots can be previewed at the Moonlight Vision and Gallery... —Sunn Thunders 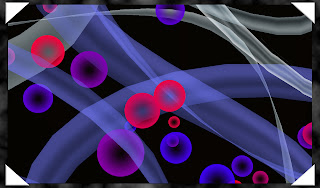 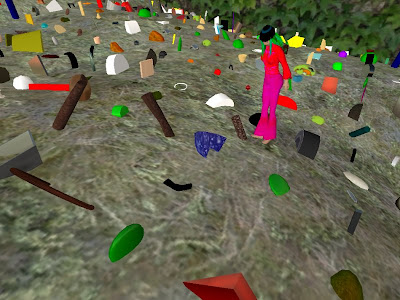 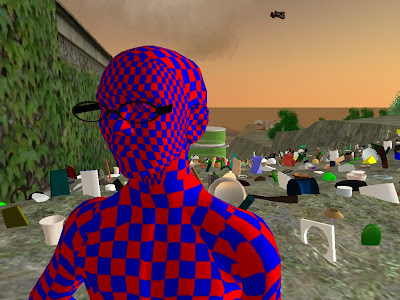 This is Thomy Loon aka danish rl artist Tommy Støckel in front of his "Primitives Collection Field", a SL land art project installed at Bloom Pearls.
SLurl: http://slurl.com/secondlife/Phyllira/169/139/90
It opened December 20th and will be on until the 24th of February 2008.
Thomy asked me if I had seen his opening night tuxedo which he mysteriously had lost...

From the press release:
Støckel has for a long time been working with accumulating simple geometric shapes to form complex abstract sculptures, and he has always seen the computer generated 3D object as an important point of reference. From a distance his sculptures resemble virtual objects, but at a closer look these sculptures have an obviously handcrafted quality using materials such as paper and cardboard. Second Life is a new frontier to Støckel – a world where certain restrictions in our normal world are non-existent, and where new opportunities for artwork come into existence. The artist’s usual, not very weather consistent, materials would under normal circumstances be impossible to work with outdoors, but in this parallel world the single avatar has quite another control over nature: Objects can be made out of nothing and the landscape can be manipulated to suit the owner’s individual taste.With the project "Primitives Collection Field" Støckel has chosen to work with a sort of virtual Land Art – an otherwise problematic genre to him. He has covered Boom Pearl's piece of land with geometric objects that have all been arranged in relation to the Second Life grid, which defines that entire world in metric measurements.
"Primitives Collection Field" consists of approximately 1,100 prims – or primitives – that have been made by disassembling a large number of freebies, and thereby reducing them to their simplest geometric parts.
Read more about Boom Pearls at http://www.boompearls.com/
Written by Plurabelle Posthorn
Posted by ninsve at 12/23/2007 01:35:00 AM 1 comment: 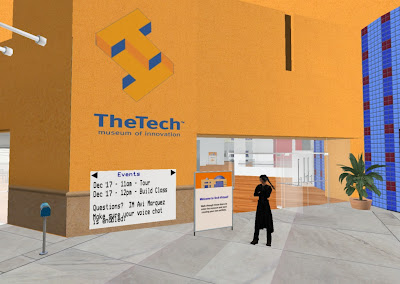 The Tech Museum of Innovation is a real world museum of technology and science in San Jose, California and they have created a virtual museum in SL where they are staging an exhibit creation challenge. The theme is "Art, Film & Music".

Daily tours of the museum are at 11am SL time.


from the Tech Museum notecard:
"Welcome to The Tech Virtual, the museum where you are the exhibit designer.

This virtual museum is part of a larger project to invite all kinds of creative people--scientists, artists, SL and RL inventors--to create and realize exhibits for The Tech Museum of Innovation in San Jose, CA. We are currently soliciting ideas for exhibits for an upcoming exhibition on art, film, music, and technology. The best virtual exhibit concepts will be eligible for cash prizes and will be co-developed as real exhibits for the physical museum.


You are welcome to explore the museum, which includes a tutorial on exhibit design (lower level) and some sample interactive art exhibits (upper level). When you are ready to start designing your own exhibits, go to www.thetechvirtual.org. On that site, you can create new projects, join project teams, and start designing.


Once you are ready to start prototyping in Second Life, visit Parkside Hall to receive some building space and support. In the meantime, we are offering lots of classes in building, scripting, and miscellaneous Second Life and exhibit design topics. You can always go and build in the Sandbox Dome on the corner of the island.

If you have any questions about this museum, designing exhibits, or The Tech Virtual project, please contact Avi Marquez. There are also open information sessions every Friday at 10am outside by the fountains. " 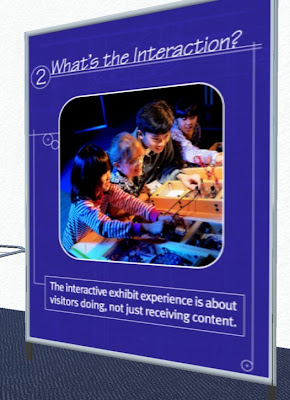 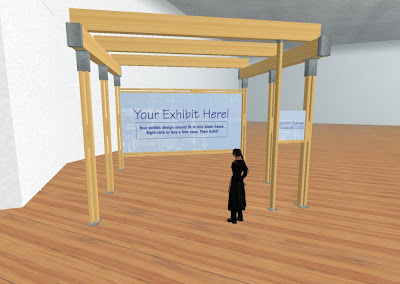 The Tech Museum of Innovation in SL 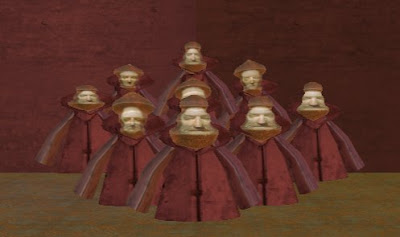 I was recently introduced by a friend to a new exhibition called CARP (for Cybernetic Art Research Project) that focuses on sound-enabled kinetic scultures. Several installations by Juria Yoshikawa are present that I shall get to in a moment, but also a charming installation involving a chorus of "dwarves" developed by Velazquez Bonetto and nnoiz papp. 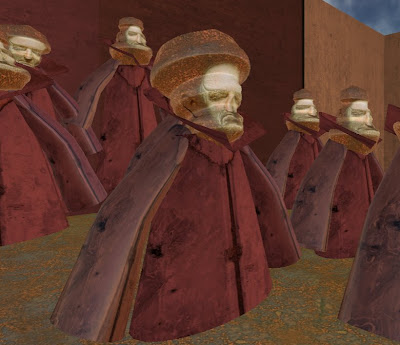 Velazquez' installation on the 3rd floor of the gallery consists of nine dwarf-like figures - they are three prim objects and therefore are sculpties. Each face and figure is slightly different. When you walk through the figure, they begin to jump up and down and emit a looped sound. Together, these sounds form a "choir" and the result is stunning. Each emits a different sound, and many are low booming sounds, with a few higher pitch sounds interspersed, but they make a very beautiful chanting chorus when combined together. 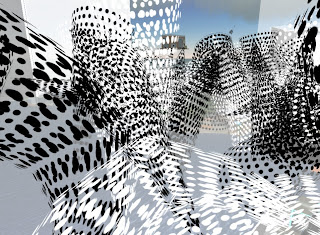 On the 2nd floor, one can find several of Juria's kinetic sound sculptures. These are also activated by walking into or through them. Some are prim-based, such as "Mixed Opposites" depicted on the lift, while others are kinetic sculpties, such as "Hunter and Prey" shown on the right. The latter sculpture changes form continuously with an animal-like sinuosity, hence the title of the sculpture. 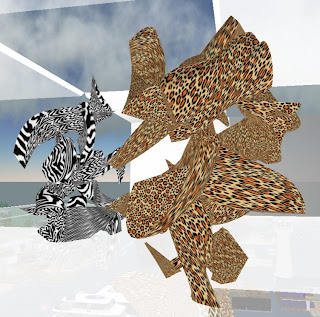 In addition to several other pieces within the gallery, there are also a number of eye-catching kinetic sculptures around the gallery building, many created by Josina Burgess. Josina is also the owner of the "Wearable Art" shop nearby, which seems to have some interesting items on sale. 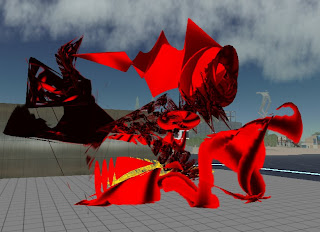 The Gallery space itself is also a very interesting and beautiful build, consisting of several "four petaled" gallery floors that are transparent and float one above the other. This Gallery is worth a visit. The exhibition is announced from November 1st to December 31st, so there are only a few weeks left to see it. So make haste!

In an attempt to centralize the knowledge that is held within the Second Life art community in one convenient place, I have initiated SLartpedia, Second Life's first SL Art wiki!

Its infinite depths are slowly being filled with knowledge of our art community, drop by precious drop-- please help me to make this a handy resource for people in-world and out by contributing!

Don't wait for someone to make an entry about you or your gallery or your accomplishments-- who can describe you and your efforts better than... yourself?

The Blekinge Sculpture Park celebrates its one year anniversary as an artistic oasis within Second Life. Congratulations to Rezago Kokorin—thanks for giving us this wonderful space to enjoy! 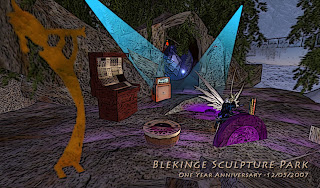